Welcome to the Aviation Page.

I do not profess to be an Expert in aviation, just an enthusiast. Any mistakes I make in statements, please don't hesitate to correct me. I will start with a little history of my experience so you will see where I am coming from.

First off, why would anyone want to fly? When there is a perfectly good earth to stand on (in most places). Is it because when you watch a bird in flight? you think, "Wow! I wish I could do that." Or is it when you stand on something high and realize you have a different view of the earth and your surroundings?   Like when you stand on top of a latter, or a house top, or a tree top, or a hill top or a mountain top. The view is breathtaking. I grew up in Delaware where the only way you could get a better view was to climb a latter or a tree.

My first encounter with an airplane, -- I don't know how old I was, but I must have been quite small. ("Small" is a relative term. I am 6 ft 5 in so I don't think I was ever "Small".) I was in an open grass field and my father was yelling something to me from the open cockpit of a "Texas Flea" tri-plane he and my uncle had put together from a kit. It was loud and made a lot of wind  so I had to inch closer and closer to hear what he was yelling at me. Finally, while the terrible high wind and thundering noise were trying to blow me away, I got close enough to hear what he was saying.  "COME ON! GET IN!" That was all it took. I remember running the other way as fast as I could.

My second encounter with an airplane, -- (A lot of rubber band wind-ups and several gas powered free-flight model airplanes in-between the 2 encounters with real planes) One optional subject in high school was "Aviation Science". I took it and joined the CAP. (Civil Air Patrol) As a member of the CAP I got a ride in a Canadian trainer and even got to turn the crank that spun the flywheel and pull a wire loop that spun the engine over to start it. I learned later that the Aviation Science class was the ground school for a private ticket. I enjoyed it and was hooked.

My third encounter with an airplane, -- Several years later in Jacksonville FL I went to Herlong field and took 30 min training in a Piper Cub. That almost ended my wanting to fly. My instructor either didn't know anything about instruction or was mad about something. He would make a turn and tell me to do it but he never said what to do. Then when I tried I was sloppy and he would just say "No, No this is the way" Each time not telling me what I was doing wrong. By the time the 30 min was up I had not learned anything and was discouraged.

My forth encounter with an air plane, -- (Not counting two trips in the Army in a DC-3 and a couple of hairy flights in a chopper at tree top level in Germany) 6 yr after the Cub ride, I again went to an instructor in Jax at Craig field. This time I was lucky, I got an ex WWII instructor named Al James. He knew just what to do to make me correct any move I made wrong. First off as with many newbys I would tend to try to steer the plane on takeoff with the yoke. Habit from driving a car. Al made me keep my hands in my lap till liftoff speed. It worked. His base of operation soon moved to Imason, the Jax main airport so to stay with Al I had to go there to get instruction. It was scary to train in and out of a major airport but I knew it was good training. I knew if I could fly in and out of this major airport through my training I would not be afraid to go into any large airport. Many pilots I met were afraid to go into a major airport. Every time I went up I had to taxi with F-4 fighters and 707 airliners until it became old hat to me. I learned where to be and where not to be when an F-4 run his engine up or how to quickly turn toward an airliner who turned and gave me a blast of his exhaust. Also learned about vortexes left on a runway on a calm day after an airliner took off.

I didn't get any benefits when I got out of the Army but later they made the GI bill  retroactive to my time in service so I received the GI Bill. By then I was married with two children and a mortgage etc, etc. I thought about collage but couldn't find anything I was interested in. So since I had close to 40 hr of flight training I applied for the GI bill and got it. It paid 90% of the bill so now I could take a lot more flight time. Got my private ticket and bought an L-2 Taylorcraft and continued on with my training for a Commercial ticket. I got the Commercial ticket close to 200 hr TT which everyone told me was difficult to do. Al had taught me to do full stall landings on every landing in the Cessna and I used it in the Taylorcraft too. A full stall landing in an L-2 is main gear a foot or two off the deck and the tail wheel on the ground and controlling the plane with elevator and rudder only. The resulting roll out is about a foot and a half. Ha! However, gusty days make a wheel landing necessary and I was having trouble there. Everyone in the Craig field coffee shop would have a field day with me. The standard statement was, "Hay! that's not fair! We only get one touch and go per approach and you get a half dozen bouncing down the runway." I had a friend with a Globe Swift who I knew was good with tail draggers so I asked him to help me. He spotted what I was doing wrong. I was pushing the stick forward when the main gear touched as I was told but not enough to keep it nailed to the runway. He said I needed to firewall the stick instead of my push the stick forward. Just pushing the stick forward did lift the tail but the bouncy main gear would bounce the plane up and the tail just went up too so it looked like a rabbit jumping down the runway. I was afraid it could nose over. He contended that unless you hit the brakes, you couldn't nose over a tail dragger with just elevator.  It was very alien to me to firewall the stick but he demonstrated it at a variety of landing speeds and even though it looked terribly nose down from the cockpit,  it seemed to work OK. I got pretty good on full stall landings in the L-2. I could maintain a radical slip all the way through flare-out and kick the tail straight just as the tail wheel touched first and then the main gear and roll-out was very short with or without brakes. I thought I was the best pilot since the Barron. Until I took my multi engine training in a Beachcraft Travelair. I did OK in the air and on emergency procedures but I never did master it on the runway. I was OK on landing but I was all over the runway on take-off. It was like wrestling a bear. My FAA inspector said "Oh well, I'll give you the ticket, no one is going to let you fly their twin without a lot more practice in it anyway." Wow! what an ego deflater!  Well, at least I didn't have the big head anymore. Here is a picture of the Taylorcraft. 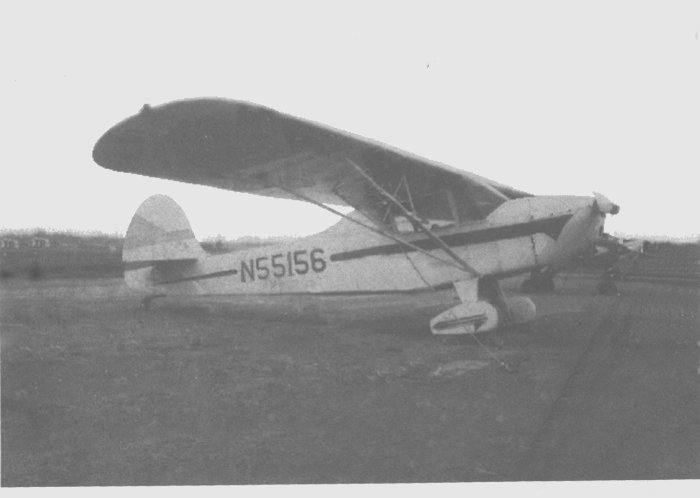 My last entry in my log book was in 1973. The only flying I have done since then is a little with friends.

Now I have just purchased a kit from a friend. This is a Long E-Z. The plans are from Rutan and the kit is from Wicks. It is not much more than a lot of foam and fiberglass. No engine, landing gear or instruments. I plan to use a Buick 215 V-8 engine that I have. There is only 15 lb difference between it and an optional aircraft engine for this plane. I have made a menu page so I can separate this project as it progresses and just Aviation stuff.