Finally, a bumper sticker for BOTH political parties!

One day an Irishman who had been stranded on a deserted island for over
10 years, saw a speck on the horizon. He
thought to himself, "It's certainly not a ship."
And, as the speck got closer and closer, he began to rule out the
possibilities of a small boat and even a raft.
Suddenly there emerged from the surf a wet-suited
black clad figure. Putting aside the scuba gear and the
top of the wet suit, there stood a drop-dead gorgeous blonde!
The glamorous blonde strode up to the stunned Irishman
and said to him, "Tell me, how long has it been since
you've had a cigarette?" "Ten years," replied the amazed
Irishman. With that, she reached over and unzipped a
waterproofed pocket on the left sleeve of her wetsuit, and
pulled out a fresh pack of cigarettes. He takes one,
lights it, and takes a long drag. "Faith and begorrah,"
said the man, "that is so good I'd almost forgotten how
great a smoke can be!"
"And how long has it been since you've had a drop of
good Irish whiskey?" asked the blonde. Trembling, the
castaway replied, "Ten years." Hearing that, the blonde
reaches over to her right sleeve, unzips a pocket,
removes a flask and hands it to him. He opened the flask
and took a long drink."'Tis nectar of the Gods!" stated the
Irishman. "'Tis truly fantastic!!!"
At this point the gorgeous blonde started to slowly
unzip the long front of her wet suit, right down the middle.
She looked at the trembling man and asked,
"And how long has it been since you played around?"
With tears in his eyes, the Irishman fell to his knees and sobbed,
"Sweet Jesus! Don't tell me that you've got
golf clubs in there too!!!!"

Aoccdrnig to a rscheearch at Cmabrigde Uinervtisy, it deosn't mttaer in waht oredr the ltteers in a wrod are, the olny iprmoetnt tihng is taht the frist and lsat ltteer be at the rghit pclae. The rset can be a total mses and you can sitll raed it wouthit porbelm. Tihs is bcuseae the huamn mnid deos not raed ervey lteter by istlef, but the wrod as a wlohe. Raelly amzanig huh?

"Great!!! now I don't have to feel so bad about my spelling"


WORLD'S EASIEST QUIZ
(Passing requires 4 correct answers)
1) How long did the Hundred Years War last?
2) Which country makesPanamahats?!
3) From which animal do we get catgut?
4) In which month do Russians celebrate the October Revolution?
5) What is a camel's hair brush made of?
6) The Canary Islands in the Pacific are named after what animal?
7) What was King George VI's first name?
8) What color is a purple finch?
9) Where are Chinese gooseberries from?
10) What is the color of the black box in a commercial airplane?

All done? Check your answers below!


ANSWERS TO THE QUIZ


1) How long did the Hundred Years War last?
*116 years
2)Which country makesPanamahats?
*Ecuador
3)>From which animal do we get cat gut?
*Sheep and Horses
4)In which month do Russians celebrate the October Revolution?
*November
5)What is a camel's hair brush made of?
*Squirrel fur
6)TheCanary Islands in the Pacific are named after what animal?
*Dogs
7)What was King George VI's first name?
*Albert
8)What color is a purple finch?
*Crimson
9)Where are Chinese gooseberries from?
*New Zealand
10)What is the color of the black box in a commercial airplane?
*Orange, of course.

What do you mean you failed?!


Why Men Are Just Happier People

What do you expect from such simple creatures?  Your last name stays put.  The garage is all yours.  Wedding plans take care of themselves.  Chocolate is just another snack.  You can be president.  You can never be pregnant.  You can wear a white T-shirt to a water park.  You can wear NO T-shirt to a water park. Car mechanics tell you the truth.  The world is your urinal.  You never have to drive to another gas station restroom because this one is just too icky.  You don't have to stop and think of which way to turn a nut on a bolt.  Same work, more pay. Wrinkles add character.  Wedding dress $5000.  Tux rental - $100. People never stare at your chest when you're talking to them.  The occasional well-rendered belch is practically expected.  New shoes don't cut, blister, or mangle your feet.  One mood - all the time. Phone conversations are over in 30 seconds flat.  You know stuff about tanks.

A five-day vacation requires only one suitcase.  You can open all your own jars.  You get extra credit for the slightest act of thoughtfulness.  If someone forgets to invite you, he or she can still be your friend.  Your underwear is $8.95 for three-pack. Three pairs of shoes are more than enough.  You almost never have strap problems in public.  You are unable to see wrinkles in your clothes.  Everything on your face stays its original color.  The same hairstyle lasts for years, maybe decades.  You only have to shave your face and neck.  You can play with toys all your life.  Your belly usually hides your big hips. One wallet and one pair of shoes one color for all seasons.

You can wear shorts no matter how your legs look.  You can "do" your nails with a pocketknife.  You have freedom of choice concerning growing a mustache.  You can do Christmas shopping for 25 relatives on December 24 in 25 minutes.

No wonder men are happier!

"Men are like fine wine, they start out as grapes and it's up to
women to stomp the shit out of them until they turn into something
acceptable to have dinner with."

History of the Middle Finger

Well, now......here's something I never knew before,
and now that I know it, I feel compelled to send it
on to my more intelligent friends in the hope that
they, too, will feel edified.

Isn't history more fun when you know something about it?

Before the Battle of  in 1415, the French,
anticipating victory over the English, proposed to
cut off the middle finger of all captured English
soldiers.  Without the middle finger it would be
impossible to draw the renowned English longbow
and therefore they would be incapable of fighting
in the future.

This famous weapon was made of the native English
Yew tree, and the act of drawing the longbow was
known as "plucking the yew" (or "pluck yew").
Much to the bewilderment of the French, the English
won a major upset and began mocking the French by
waving their middle fingers at the defeated
French, saying, "See, we can still pluck yew!
"PLUCK YEW!"

Since 'pluck yew' is rather difficult to say, the
difficult consonant cluster! at the beginning has
gradually changed to a labiodentals fricative 'F',
and thus the words often used in conjunction
with the one-finger-salute!

It is also because of the pheasant feathers on the
arrows used with the longbow that the symbolic
gesture is known as "giving the bird."

Since I am in the hospital now I have no need for my digital camera anymore. If you want to buy it let me know.

I have attached the last picture I took with it to show the quality of photos it can take. 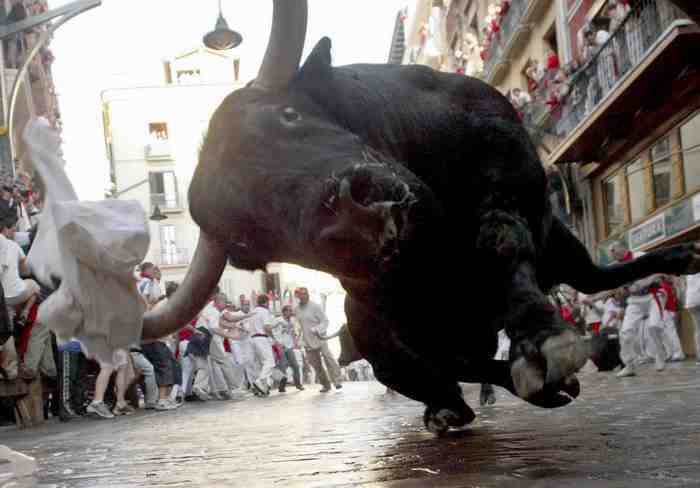 A woman went to the doctor's office. Where she was seen by one of the
the new doctors; after about 4 minutes in the examination room she burst
out, screaming as she ran down the hall.

An older doctor stopped & asked what the problem was; she told him her
story. After listening, he had her sit down to relax in another room.  The
older doctor marched down the hallway to where the 1st doctor was &
chided him saying "What's the matter with you? Mrs. Terry is 63 years
old, she has 4 grown children & 7 grandchildren & YOU TOLD HER
SHE'S pregnant?"

The new doctor continued to write on his clipboard & without looking up
said, "Does she still have the hiccups?"