When I call this "Old Bike Pictures", just how old are we talking about? I guess that is a relative term. Relative to how old you are. Old to an 18 year old is maybe 5 to 10 years old. But old to me (older than dirt) is really old to an 18 yr. old. Anyway, these are just a few pics I had of bikes of the past. 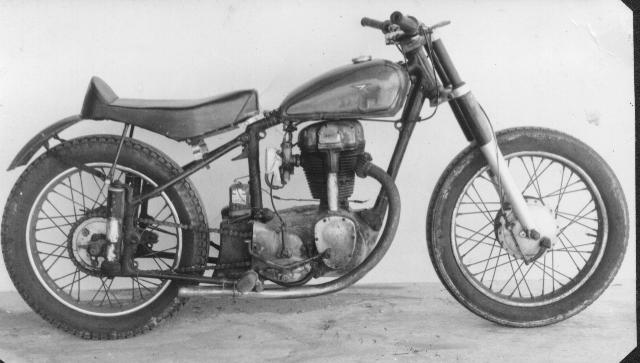 This is a 350cc German Horex. Set up as a trail bike. Note the battery ignition and the high tech air filter. Dual exhaust port head with one port blocked off. Don't laugh, this was a great handling and good power band for a dirt bike. The short plunger type rear suspension was not up to par with the current suspensions but many Japanese 250 two stroke riders in the late 60s and early 70s were shocked to see this bike right in their midst. 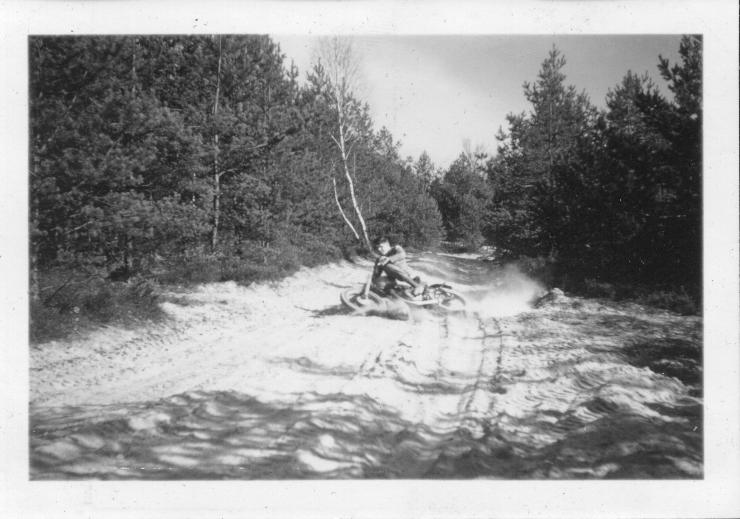 This is me on that Horex in a tank trail in Bamberg Germany 1958. No! your wrong, I did make the turn into that side trail. Germany was a great place to have a dirt bike even if you had to make it out of a street bike. Back then there were very few dirt bikes direct from any manufacture. Most were stripped down and modified street bikes. 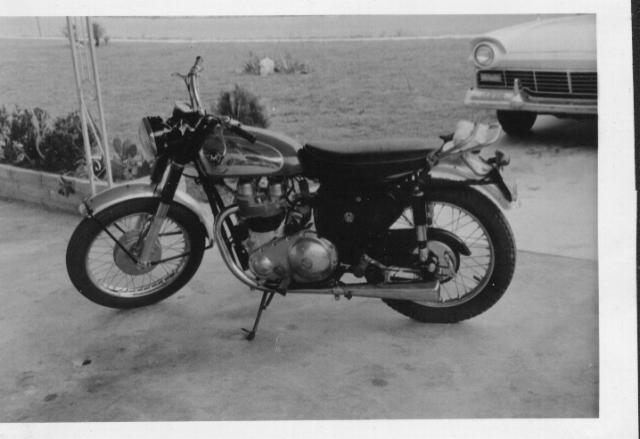 My new 650 Matchless, 1960 Jax FL . This was a street/dirt bike and had a good wide power band and was one of the best handling bikes I ever rode. It was not as fast on the street as a current Triumph, BSA or Norton but put it sideways in dirt and it was in it's glory.

One time on North Main St. in Jax while headed home at night I stopped at a light and a 650cc BSA pulled up next to me. the rider said. "I heard that a Matchless would run" (that was a challenge to drag race to the next light) I knew my trusty steed could not beat a BSA in a street drag race. I had been a BSA mechanic in the local dealership. I responded with "No, a Matchless is noted for their handling and make a "B"sa look like a "PIG" on dirt. I learned at the dealership that most BSA riders really hated it if you emphasized the "B" of BSA. This really lit up a fire in this guys eyes, I could see the look on his face that I hit a nerve. Ha! I was good at rubbing fur the wrong way at times. Ha! I told him to follow me. I knew of a street corner that was always covered with a sprinkle of sand as I went that way to work every day and had fun sliding that turn. I approached the turn at a speed that I knew I could just make it. I signaled him to make a turn and laid the Matchless down so I could leave a thin black line on the clean pavement and as I hit the sand, the bike went into a full lock slide. As any dirt track rider knows, pick the bike up and lean to the inside (like a road racer) and roll the throttle on. ( a real Pro then picks his foot up) Not me though, this stuff is slippery than owl snot. I was busy now at my trade but I could see the flash of his head light going wildly from side to side. I smiled to myself as I knew I had achieved my objective. "To teach a lesson not to challenge a Pro dirt tracker to a race unless you are at that level" As soon as I had the Mighty Matchless calmed down, I turned to see if the BSA was still up. He had got out of shape and went up over a curb and across a walk way into a chain link fence at a park. He was trying to get a handlebar untangled from the chain link fence as I approached. I asked if he was OK. (with a grin)  He said he was OK (not looking at me and a lot of distress on his face.)  I thought to my self, "He learned a lesson" as I rode away. But I was wrong. That story later. 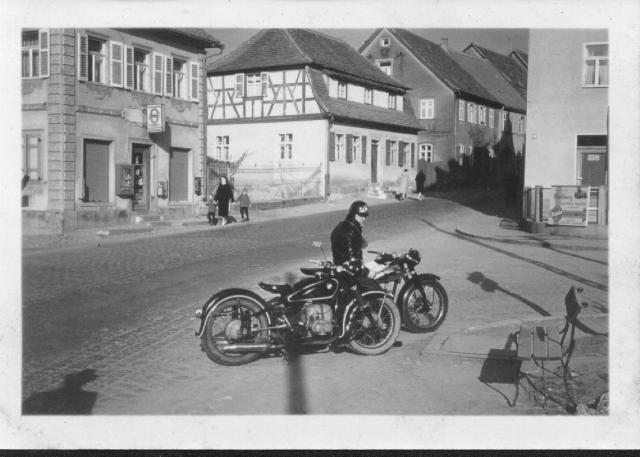 My BM Wobbly and Mac on his NSU in a small German town near Bamberg. 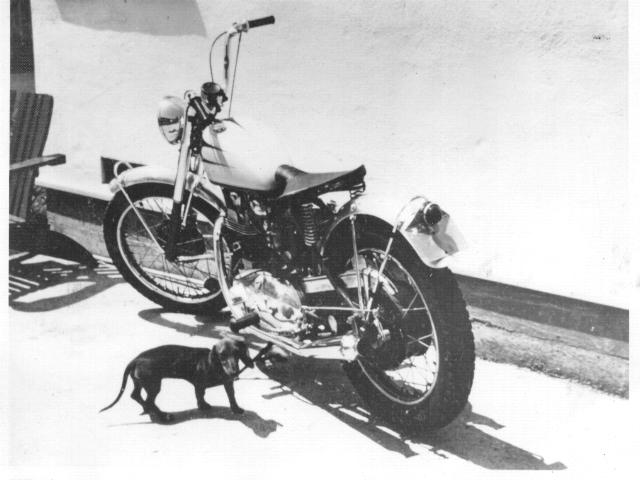 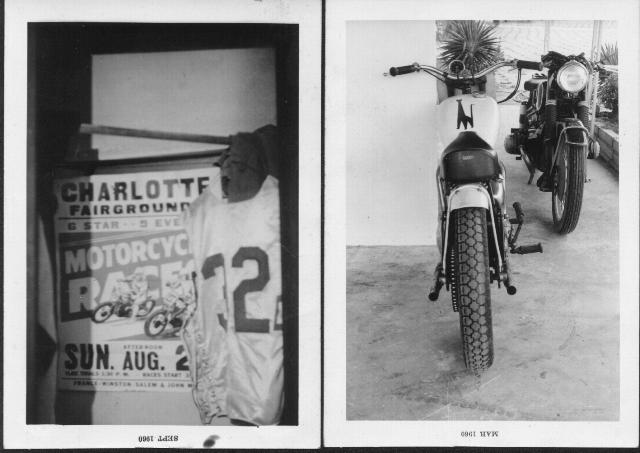 Pic on right is my 500 Tri dirt tracker, I tried a straight pipe set up but it didn't work so I returned to my reverse cone megs. Note Firestone ANS tire is worn on right side. Factory H-D rider Tommy Morris would ware down a tire on the one side and give it to me and I just turned it around an used the unused side. BM Wobbly in the back is my bike I brought back from Germany. Left pic is a poster I got from Charlotte. 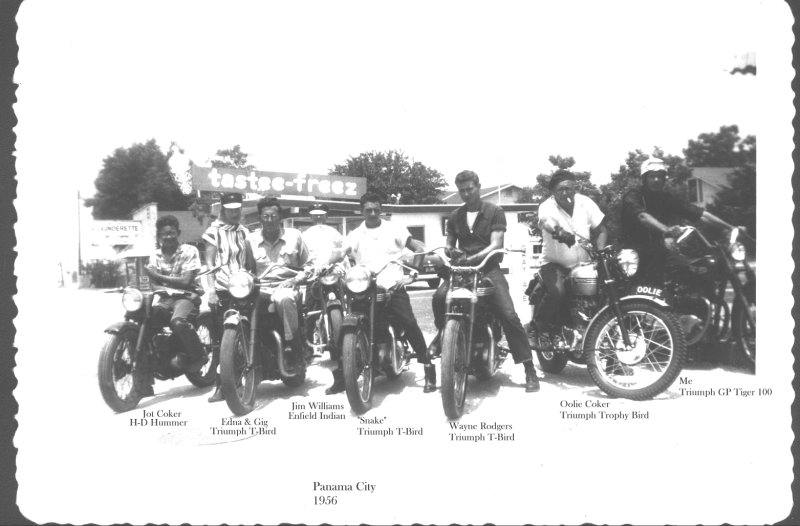 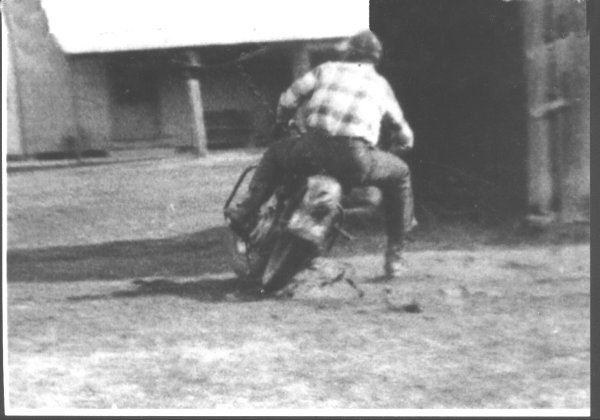 This is me on my 500 cc Army Indian V-twin. You would be surprised how long I practiced "Flat Tracking" to the right before I found out all Flat Tracks in the US went left handed. This was about 1952 at my grandfathers farm in Milford Delaware 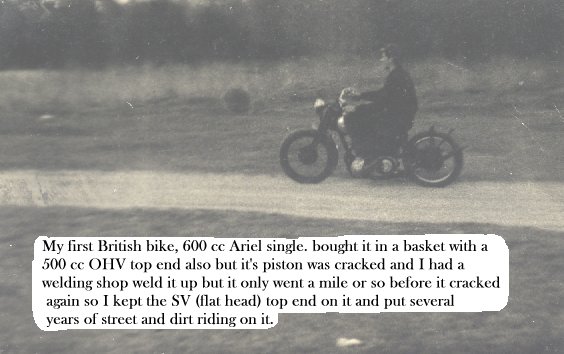 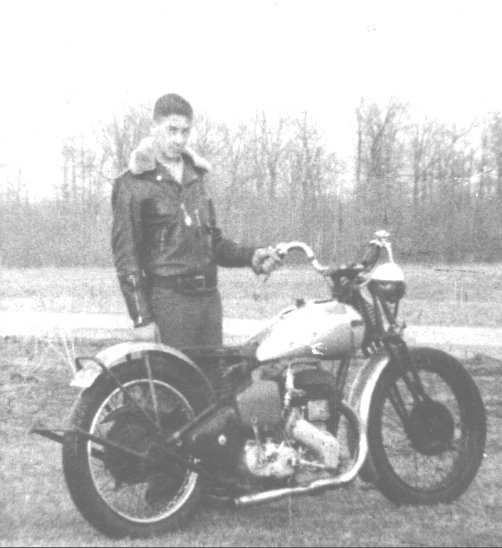 Friend Bill holding my 600 cc Ariel SV single. I later found a set of Matchless hydrolic forks and switched from the girder forks 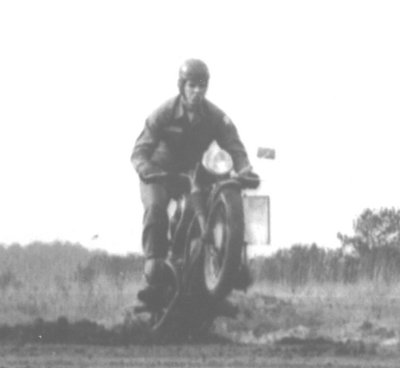 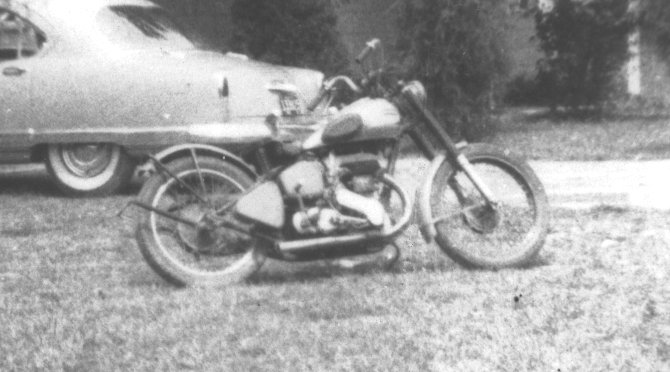 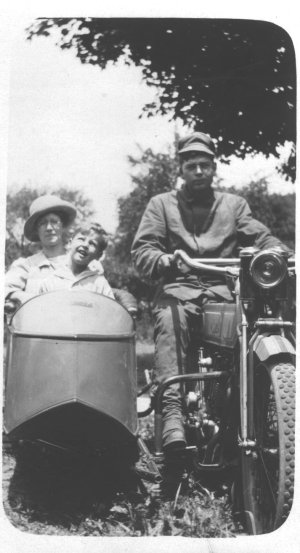 How far back does my family go in motorcycles? This is my grandfather, grandmother & my father.

I'm guessing this is about 1917. My grandfather had a multi car and motorcycle dealership in Penn. 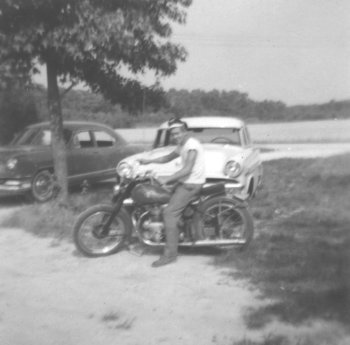 Friend, (Richard) on his Indian Warrior 500 cc vertical twin. Ford behind him was his and we went to Daytona Beach races in it once.