Everyone has already heard that the price of oil is the main cause of the problems the whole industrial world is having. EVERYTHING we eat, transport, heat, cool and package is directly or indirectly associated to the price of oil.

Many of the car manufactures are now bragging about 23 to 31 miles per gallon. In 1967 I could tell any of my customers who had an XK-E Jaguar that after I tuned it up, it could run a true 150 MPH and get 28 MPG at 70 MPH. The XK-E Jaguar is not a small economy car.

That was 42 years ago. Now you tell me how much improvement the car manufactures have made in 42 years in fuel economy.

They are just now inching into hybrid cars and they keep talking about Hydrogen powered cars and even show us proto types. But how many proto types have they ever produced? They show us these cars at car shows but NEVER produce any of them. They say  “The tail fin was inspired by their proto type or Concept Car ” or “The design of the head light was from their proto type” but that’s all we get.

The problem is that the way they build a car is to first look in your pocket to see what you can buy, and arrive at a cost of the car. Then they divide up the different sections of a car by the cost of each section. If one department makes a section and has zero failures, then that department get it’s funding cut and if a department has too many failures, that department gets more money.

In 1980 I received a grant from the US Dept of Energy to build a fuel efficient farm size alcohol still. And to convert a car to run on straight grain alcohol. (Ethanol)

In my studies and the progress of the project I found several false statements put out by oil companies and other opponents to alcohol as a fuel. One was that it costs too much to make 200 proof alcohol (pure alcohol).

This is a true statement but misleading. I ran acceleration tests with just a stop watch and a measured distance. I ran on 200 proof and on 190 proof, 180 proof and 170 proof.  170 proof alcohol is 15% WATER. And the acceleration tests showed no significant slower times with 170 than the 200 proof. At first I couldn’t understand how I could displace 15% of the fuel with water and still go just as fast. The key was that water mixes with Ethanol alcohol and it went into the combustion chamber as a liquid  and turned into steam and thus expanded and replaced the lost expansion of the lost 15% fuel. Thus making better use of the heat in the combustion chamber.

As for the cost of alcohol fuel, it does cost a lot to make 200 proof alcohol because all stills can only get into the 190 proof at best. The last bit of water is usually removed by a molecular sieve. And that is expensive. But 170 proof is easy to make and not expensive to produce. They also say it would raise the cost of food grain in the whole country. This too is misleading because if sugar cane were used much more gallons per acre could be produced and several of the batching processes could be eliminated thus making the cost of producing Alcohol much cheaper. (As T. Boone Pickens has noted)

I am now studying compressed air as a fuel for an engine and again I am finding misleading information.

I have a Olds 215 V-8 that runs on compressed air.  It takes 720 degrees of crankshaft rotation to get a power stroke in all car engines. I only use 95 degrees of the 720 deg. Because I am only starting the engine with direct injected compressed air to spin the engine for starting on gasoline.

My studies have prompted me to design an engine that will power a car with just compressed air.

No 720 degrees to get a power stroke

No need for the engine to run at stop lights

No need for the engine to run on deceleration

No need for high RPM to gain torque and power

You may ask, why is no one making compressed air engines in the US? To answer this you will need to know who owns major stock in oil. Do you think possibly Senators and Congressmen? and how about the car manufactures? We already know the Bush administration did.

Do you really think that the big three can’t build a compressed air powered car? If I can make a V-8 Olds run on compressed air in my garage at home I know they can.

Think what would happen to the price of oil if most of the people in the US had a compressed air powered car as their second car.

Personally I would not like to get on the expressway with a light air powered car but I would enjoy driving on secondary roads especially knowing that I was using absolutely NO gasoline.  You may say what does it cost to compress the air in the tanks?  I am in the process of researching the cost in kilowatts to run the compressor. I will up date this page as I receive info back from compressor manufactures. If you get 23 MPG of gas and you can find gas at $1.56 per gallon. You are driving at about 7 cents per mile. I will update this page when I get the KW hour rate of a charge of air that the compressor will use if a service station were to install a compressor to sell air.  BUY AIR?? Yes, you already pay for the air to pump up your tires at service stations and you pay for water to drink from the same station. At least the air would not be coming from a foreign country who openly express hate for us.

Here is the engine on a test stand almost read to test run on gasoline. Test runs on air line and on the onboard tank have already been completed. 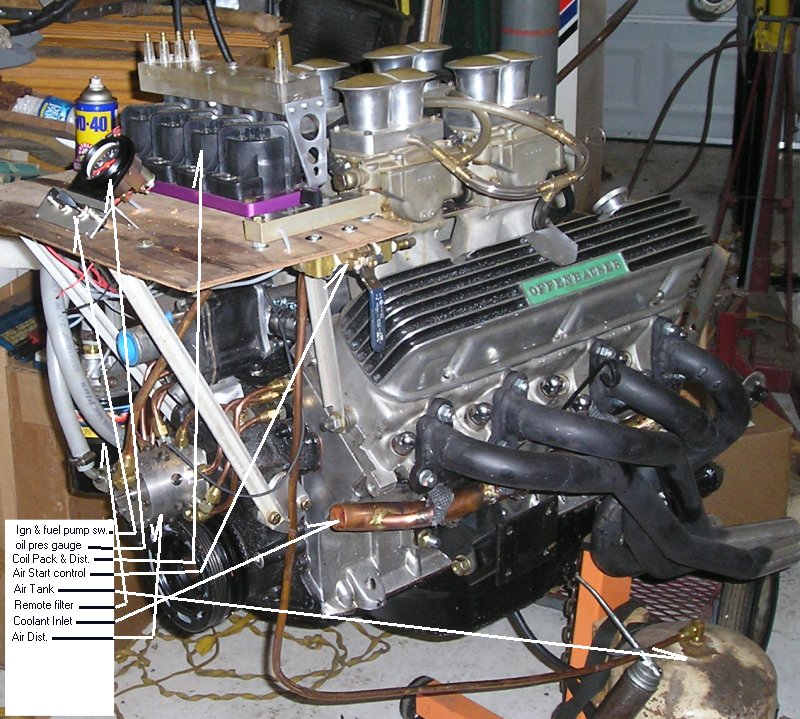