That may be, but lets look at the standard cooling system used on most all cars. Coolant is pumped in through the the front of the block. On most engines it travels all the way to the back of the block. In some cases they use a few small transfer holes from block to head at various points along the block. It enters the cylinder head at the other end and travels back through the head to the front where it exits. (usually through a thermostat) Many engines have a bypass at or near the thermostat. Then it travels through the radiator and back to the water pump. Heater connections vary but generally they pick a high pressure point to tap into for hot coolant and a low pressure point to return. Fans are used to keep air moving through the radiator.

You may say; "Well, what's wrong with that?" We have to look at some facts to see. (not my opinions, facts)

1. Coolant that moves too fast through an engine transfers less heat from the engine to the coolant.

2. Coolant is moved slowest and gets best heat transfer at idle when least amount of heat is being produced.

3. Coolant is moved fastest and gets poorest heat transfer when engine is producing the most heat at speed.

5. Best heat transfer occurs when the metal of the engine and the coolant have the most difference in temperature.

6. Coldest coolant enters and contacts the front cylinder wall. It travels and picks up heat from each cylinder wall until it reaches the back cylinder. Poor heat transfer at the point. It enters the head at rear already warmed by all cylinders. Heat transfer improves at this point because the head is much hotter than the cylinders. The coolant picks up heat as it travels forward until it reaches the front cylinder head where the heat transfer is poor because the coolant is already closer to the temp of the head.

7. Most cars don't need a cooling fan above 35 MPH. Most cars have enough ram air in the front of the radiator that the fan is useless at that point. However, many cars could improve this by allowing engine compartment air to except. Even though the bottom is usually open, air has difficult time exiting there because of the air passing under the car in many cases acts as a barrier.

9. Water and antifreeze form small pockets of steam in the head that insolate the coolant from the metal of the head which cause hot spots in the head.

10. Heat is something and Cold does not exist. Heat is energy, Cold is just the absence of Heat. This means heat can accumulate.

Fine! but what can I do about that? I can't redesign my cooling system, can I?   The answer is "YES somewhat". First look at the front of your car. (any kind of car) Get away off to the side of the car and look at the profile of the front of the car. Is there a rounded design below the radiator intake, or rounded design below the bumper? Answer, Yes on most cars. This means that at speed there is a compression of air that is forced under the car. Unless your car is very wedge shaped under the bottom or is a good ventori effect it will remain a high pressure volume of air. Now, the air going in the grill and through the radiator is greatly reduced due to the restriction of the radiator, this would result in a lower pressure in the engine compartment normally. So, the higher air pressure under the car moves into the engine compartment raising the pressure. This raised pressure slows down air coming in through the radiator. Thus decreasing the effectiveness of the radiator and because heat is accumulative, raises under hood temp. This accumulative heat will build and boil the fuel in a carburetor. Fiat noted this and installed a small fan with duct work to blow air on the carb. One car manufacture put such a device on a fuel injected car because of accumulative heat.

There are several ways to correct this. One method is to just get one of those dumb looking air dams for the front of the car. another way is what my son did to an MGBGT he ran in local autocross. The rounded front fenders and the high windshield on a BGT forced a lot of air off the sides of the hood and over the sides of the fenders at all speeds. This is well noted driving in rain. While changing to fiberglass fenders he cut large holes in the wall of the body just next to the wiper motor on one side and next to the master cylinders on the other side. Then he cut louvers in the side of each fender. The air rolling off the hood and over the fenders along with the air moving around the side of the car, made this a low pressure area which drew drew air from the engine compartment. 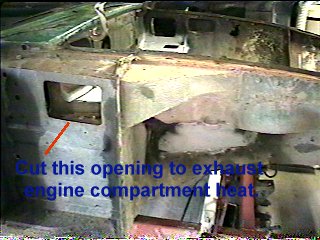 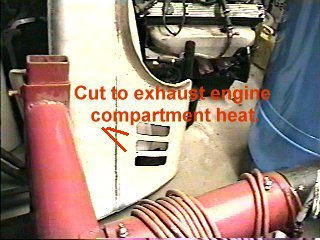 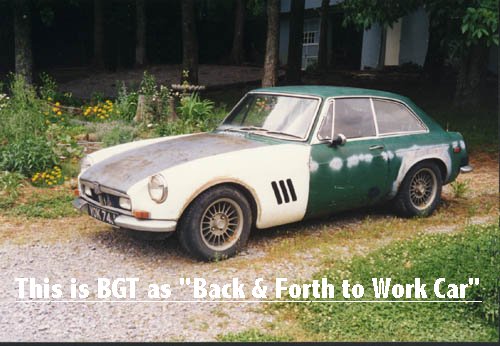 More drastic cooling system alterations were tried with success on the MG 1800 engine. If you look at a lot of Black MG 1800 engines (70s) you may see many with some seepage between the head and the block between # 2 and # 3 cylinder. I found it to be rare on red engines (62 to 67) I always shrugged this off as a result of emission control raising the temp of the engine. Which is partly the problem. However, while having a 67 and a mid 70s engine down, I noticed there was a different size transfer hole in the middle of the block and one was missing. This 70s head had been seeping although the head and block did not need to be resurfaced. These were my engines so I decided to play. I drilled out the small hole and drilled an extra hole in the block where it was on the red engine. The holes were already in the gasket and head. I used this engine for over 5 years after that with no signs of seepage. I realize this is an average of one, but I am convinced that this lack of a small amount of block to head coolant transfer was causing the head heat up in the center and to bow up causing the seepage.

Another point to consider is pulley size on either the waterpump or on the crank. I don't have a rule of thumb to help here but if you are modifying an engine and have the choice of speeding up the pump or slowing it down, you should opt to slow the pump speed down.

A point to consider is electrolysis in a cooling system. This can cause erosion of internal parts of the cooling system which can be disastrous. This problem is noticeable on the Series 3 jaguar XJ-6 and can be a problem on any car. It can be caused by several things. The first is a resistance in the engine to body ground strap. don't think just because your car starts fine that you don't have a problem. Here is a test. Engine cold, radiator cap off, put the positive probe of a volt meter (set on a low volt scale) in the coolant and contact the negative probe on the negative post of the battery. Now, have someone hit the starter and speed the engine up a little. The voltage you see adds to an already problem of different metals used in engines with a fluid that acts like an electrolyte in a battery. The lower end of the cylinder head studs gets the worst of it and metal leaves the studs until they just brake off. I had one get down to a 1/4 inch diameter before it popped. If you remove them you will not see rust, the metal is just missing. This is a problem with any engine that has the studs extend all the way to the bottom of the block. Some diesel engines have this same problem. There are additives you can put in the cooling system to slow this down and you should check your engine to frame or engine to battery ground strap. If it looks OK, consider adding an extra ground strap.

Never remove a thermostat and run with out one unless you knock the guts out of one and install the outer ring. This can not be done on any thermostat the has any kind of balker ring (early A-H Sprites, Midgets etc) or bypass ring or bypass plate like used on Jaguar. The only way that can be done is to block off the bypass hose. I have decided to go radical on cooling system design on my project MBGT V-8 and will detail it as I progress including the end results. You can follow that in the section called "Project" in the main menu.